Tue, 07/03/2012 - 08:41 - jmslesin
Printer-friendly version
Tweet
Yesterday, after a weekend in Andong, I came home to a computer on the fritz.  Less than 3 weeks after my Apple Care Extended Warranty runs out, my battery starts acting wonky and my power cord won't light up.

While I was gone for the weekend, I let my computer run itself out with the hopes of recharging it on my return to find it miraculously fixed (because inanimate objects fix themselves all the time, right?).

I was flipping my magnetic power cord over to see if I could make it light up and respond (it had worked last week) and then things went haywire to say the least. 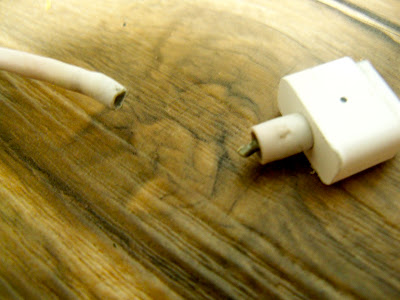 The wires completely tore apart from the plug without really any resistance.

Living in Korea without a laptop makes me feel a lot more isolated, so I am thankful to have a working computer again.

Well, 110,00 Won, or about 95 Dollars later I have a new power cord, and my computer back up and running.  I'm still worried about this "Service Battery" bit, but I hope it'll be okay.  At least at the Apple licensed store had what I needed (they're called a# and are right in the KSU neighborhood), but they said they don't repair computers, which sucks.   What a great way to save money before Japan.  If it gets really bad I might actually have to lug my Mac to Japan so I can take it to an Apple store, but I really don't want to and that's only if the situation gets dire.

On the bright side, the part that connects from the outlet to the big white box of power and joy (before it runs up to the computer) still works fine on my old one so now I have a US plug and a Korea plug for my laptop without having to use a converter.

From Busan with Love,
Jenna