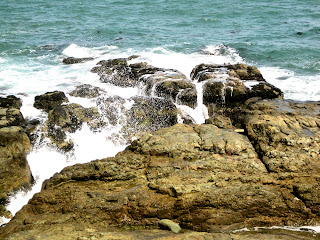 Our eyes scan the rocks under our feet, looking for the footprints of the long extinct Ultrasaurus. It’s been awhile since I’ve gone on a dinosaur print hunt. Okay, I’ve never actually tried to find dinosaur prints before, and it doesn’t look like I’ll be successful today. We conclude they the prints must actually be these foot-wide indentations now filled with shallow pools of water. 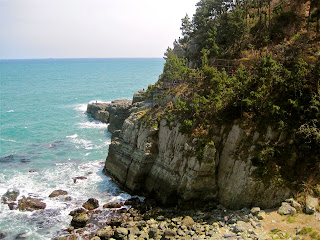 Igidae Park (이기대)  in Busan is a perfectly lovely way to spend an afternoon. The waves crashing on the rocks, one and another and another, a consistent white-noise murmur that subdues me into feeling more relaxed than I have in a long while.
The Igidae coastal walk stretches out on the southwestern shoreline of Busan. Our taxi driver drops us near the middle of the path. We follow it along the shore, pass couples sharing ramen, families sharing picnics, fishermen sharing time with the sea. We run into some former students, twins who were some of my best students. I remember how much I miss having them in class. At places, the way the sun hits the rocks hits the waves and the trees stand tall on the edge of the cliff, I flashback to once upon a time when I was in Portugal. 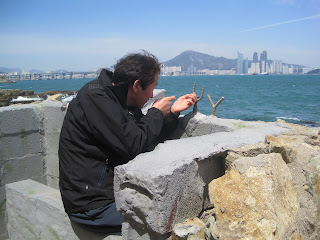 Once in awhile, we come across tiny cement bunkers that were at one time manned with soldiers looking for North Korean subs. At one, a couple of men are messing around, posing as if they have guns in the metal prong barrel holders. One agrees to a photo. The war was really not that long ago.
Later on, we pass a sign that tells us why this place is named Igidae. Like just about every other tourist sign we ever see, this one alludes to the entrenchment of the Japanese in Korean history:
When the Japanese invaded Joseon in the late 16th century,
they conquered Suyeongseong Fortress and held a feast
to celebrate their victory at a high, open spot that
commanded pleasant scenery. Two Korean gisaeng
(female professional entertainers) were taken to the feast.
They seized a drunken Japanese commander
and jumped into the sea
as a reprisal against the Japanese invasion of their homeland.
Thus, the name Igidae, which means two gisaeng, was given to this place.
The women’s resolve kicks ass. 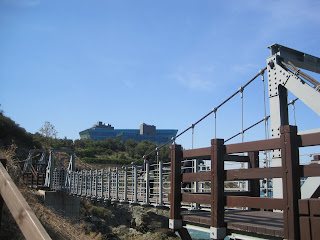 I try to muster up an ounce of my own resolve as Shane and I cross suspension bridges leading back toward the subway stations. I’ve lately realized it is not heights I am afraid of, but ledges. Back on safe shoreline, we amble down onto some rocks and watch an ajoshi stacking rocks into spires, a ritual we’ve before been told has to do with seeking good luck. Shane stops and constructs a stack of his own. 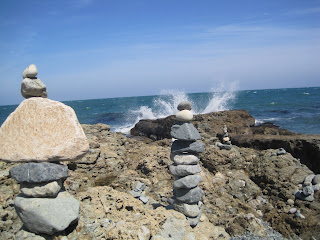 I just watch the two of them work without joining in myself. If the universe sends any more good fortune my way, I’ll burst from bogarting too much of it for myself. 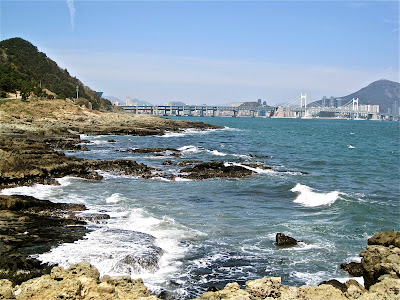 Nice piece. For a really good hike you can walk the entire length of the coast all the way to the SK View apartments at Oryukdo. Takes about 2 hours and is an excellent not too demanding hike.