In the Glass Box

Wed, 01/13/2010 - 21:59 - busanmike
Printer-friendly version
Tweet
A phone box near our apartment was vandalised earlier this month, and you could tell this was something a little unusual by the fact that people - especially the elderly - were stopping to stare at it as they walked by. I come from a heavily vandalised country - I'm referring to property defacement by individuals in this case rather than the actions of successive governments - so it wasn't anything worth a second glance to me, except that I realised how out of context it seemed, because now I come to think of it I don't think I've ever seen anything here so deliberately vandalised before. 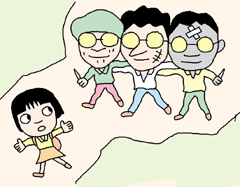 The KT phone boxes in question are actually outside a medium-sized local KT office, so I suppose one mustn't rule out the possibility that it may be an antagonised customer or disgruntled employee...
--