Skip to main content Skip to search
Secondary menu
Home » Get in the holiday spirit!

Get in the holiday spirit!

Mon, 10/12/2009 - 09:01 - oneweirdglobe
Printer-friendly version
Tweet
Which one? Take your pick - there's a Halloween hafla (an Arabic word for "a social party with music, dance, and food") coming up in a couple short weeks: 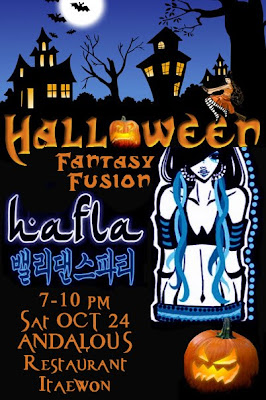 Check out the Facebook group for a map and more information. Cost for the event is FREE (pay for your own food and drink). Bring your hip scarf if you want to dance, and plan to eat, drink, and be merry.

While still several weeks away, Thanksgiving typically has a few places to go around Seoul. Itaewon usually has a few restaurants that offer classic American buffets; none have been announced yet this year, but Daniel Gray of Seoul Eats wrote about your options around this time last year.

Also announcing: THE MESSIAH - yes, that musical about Christmas - coming here in Seoul. A group of expats (myself humbly included) will be performing the entire work in mid-December. Further details to be announced as they come out - but there's also plenty of time to join the choir. If interested in joining, it's free as well (pay for your own copy of the musical score, which you keep) and requires once-a-week practices on Saturday afternoons. Here's the Facebook group, or look here for some more information.


Any holiday plans this year? Comment away - what are you doing, or what have you heard about?