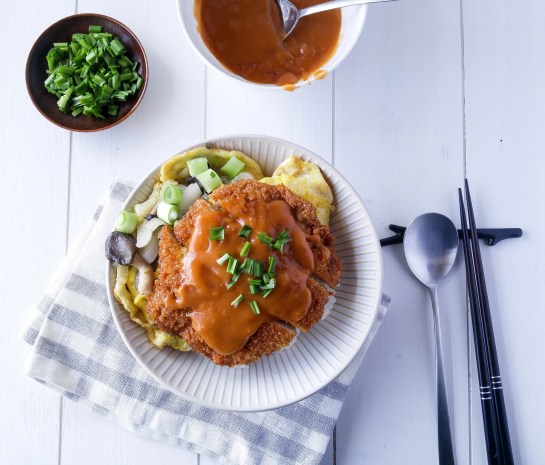 Donkas has a pretty cool history. Technically, it is a Korean adaptation of a Japanese food called tonkatsu, while tonkatsu, in turn, is an adaptation of Austrian schnitzel. The name comes from the Chinese character for pig — ton or don — and katsu or kas is a reworking of the “cut” in “cutlet”, based on the Japanese pronunciation of the word. The concept of the pork cutlet made its way to Japan in the late 19th century, where it underwent a few changes. Japanese style pork cutlets are not pounded as thin as schnitzel, and they are cut into strips before serving to make them easier to eat with chopsticks. The breadcrumbs that are used are also much coarser. Generally, Japanese style cutlets are served with thinly shredded cabbage, rice and a potent adaptation of Worcestershire sauce (with various ingredients added, such as ketchup, sugar or oyster sauce) that is dark and shiny. 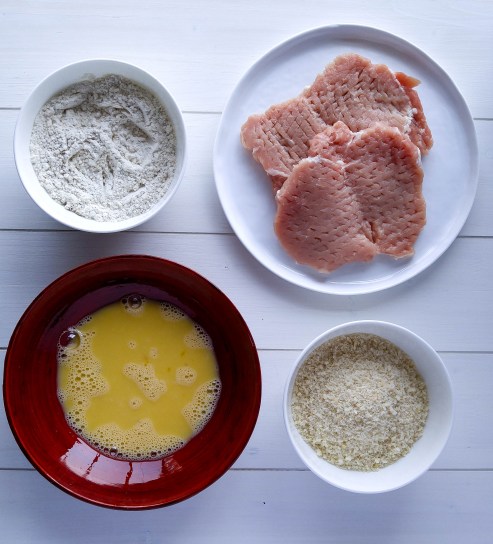 Japanese style cutlets are widely available in Korea, but Koreans have made a few changes of their own. Some places have reverted back to a more Western style, pounding the cutlet out to make wang-donkas (“king pork cutlets”) and serving them whole with a fork and knife rather than chopsticks. While Japanese cutlets are usually served with the sauce on the side for dipping, some Korean places slather it on top. 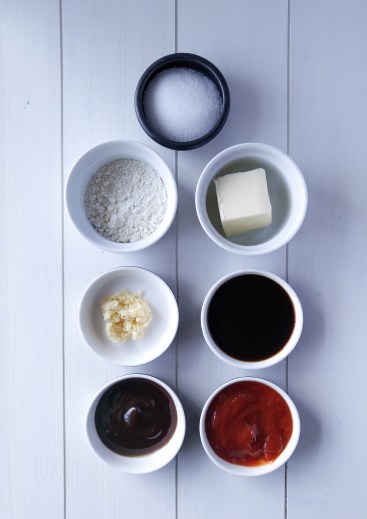 The sauce is also a bit different — there are many, many variations, but many Korean versions use a roux made with butter and wheat or rice flour as their base, with the addition of various other ingredients such as ketchup, soy sauce and sugar. Donkas sauce recipes are one of those things that successful restaurants tend to keep as closely guarded secrets. I add garlic and barbecue sauce to mine. Everyone should have their own version. 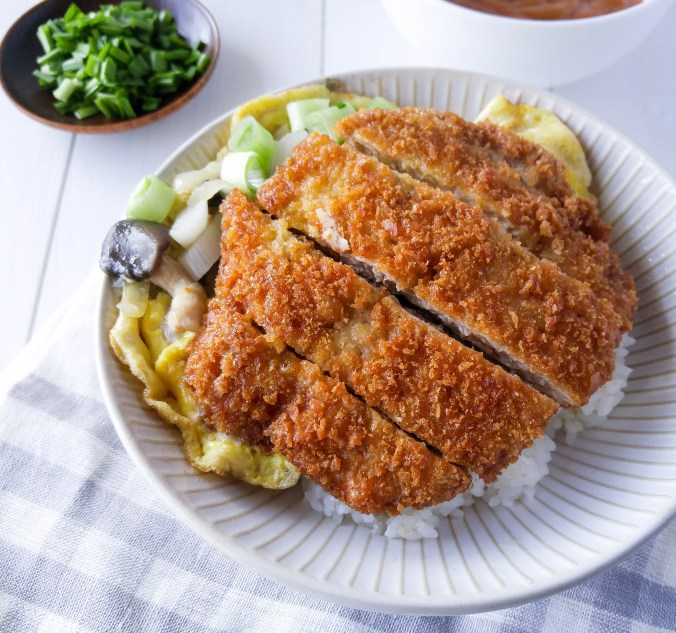 There are many, many kinds of deopbap in Korea. The word comes from deopda, the verb for “cover” and bap, which means rice. In other words, rice covered with something. Donkas deopbap usually consists of a breaded and fried pork cutlet which has been returned to the frying pan and slightly (or entirely) covered with a scrambled egg and sauteed vegetables (usually oyster mushrooms, onions and green onions), served on top of a bowl of rice and topped with donkas sauce. 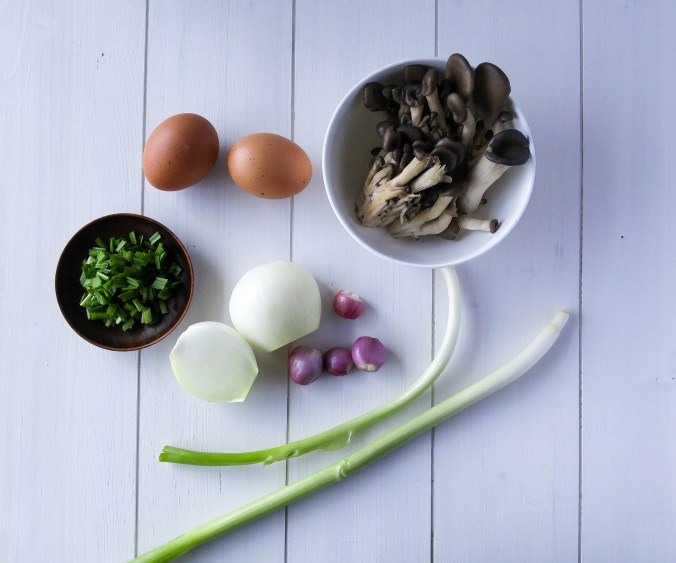 I’ve been pretty true to the original, opting to put the egg and vegetables off to the side — putting both the egg and the sauce on top of the cutlet with the steamy hot rice underneath turns it too soggy for my liking. I did add some shallots since I had them on hand, but between the onions and green onions topping the egg, the garlic in the sauce and the chives I garnished with, I don’t think their flavor really came through in any significant way. 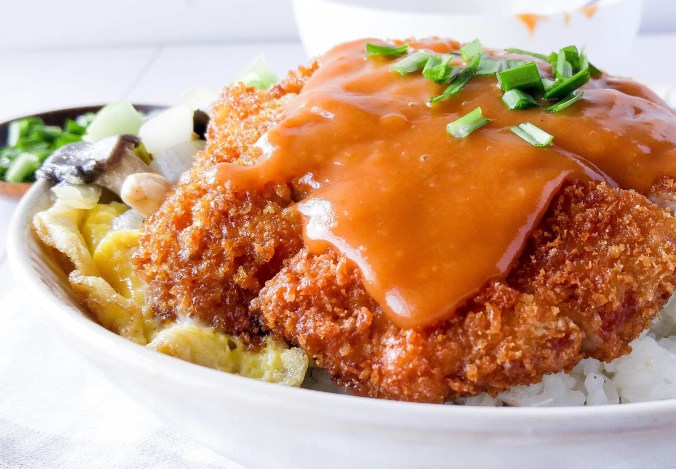 There are a lot of steps involved in making donkas deopbap, but I think it’s well worth it. When you throw it all together in a bowl, you’ve got an entire complex meal with rich and balanced flavors right there in the palm of your hand. 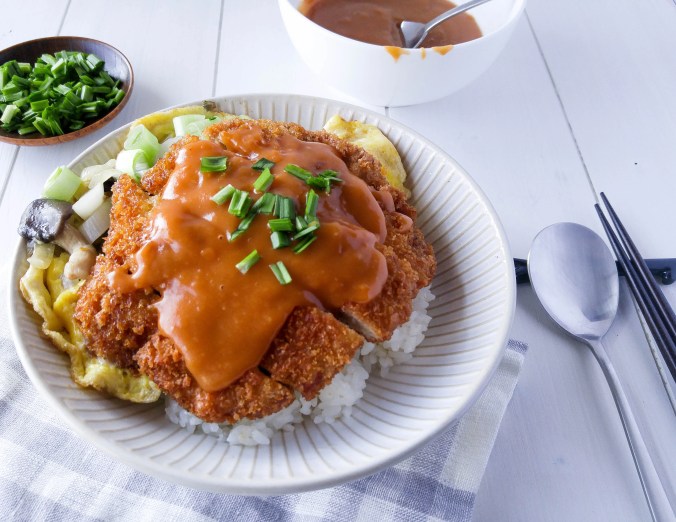 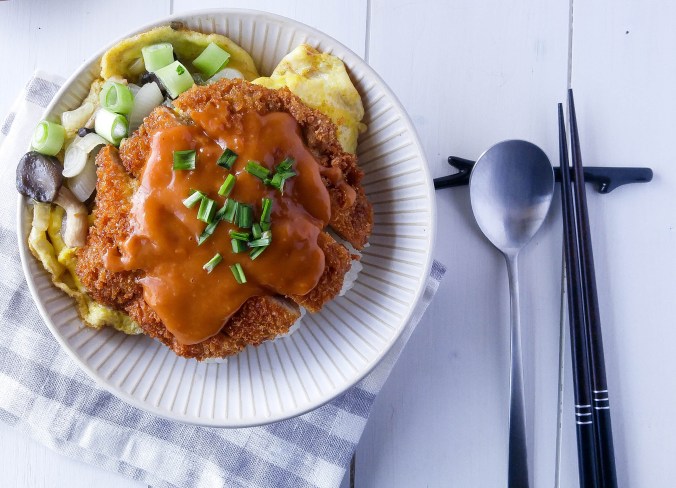 Cutlets
Sauce
Note for Those in Korea