Thu, 02/11/2010 - 12:27 - busanmike
Printer-friendly version
Tweet
I received a letter from the Ministry of Justice at the weekend. It was about the Korean Immigration and Integration Program, which neither I, nor apparently Google, had heard of before. I grew up in a city where it was a given that any communication from local government or schools would arrive in four different languages, but this attempt to reach out towards certain immigrant minorities in a spirit of friendship was interpreted by a fringe element as an invitation to burn English books they disagreed with between City Hall and the Police Headquarters. Later, a good number of them decided that protest was inefficient, and the brilliantly elegant solution to creating an integrated society was to kill everyone who disagreed with them. Just so you know where the Ministry of Justice are coming from, their letter is written only in Korean, and it points you to a website - more on this later with a warning - which is also only available in Korean, save for an English menu entitled "INFORMAION" and a section curiously called "MORGUE". One might have thought the website at least could have had a brief explanation in English, Vietnamese and the language of any other major immigrant group that tends to end up on F-type visas - especially as the Ansan Migrant Community Service Centre managed it - but then perhaps that would lead us to the point where we're burning Korean books outside the Ministry of Justice a few years down the road.

The Free Dictionary defines integration as "The bringing of people of different racial or ethnic groups into unrestricted and equal association, as in society or an organization". So there may be an important lesson here - integration in Korea in 2010 does not necessarily mean arriving at some level of equal association through multicultural mutual understanding, or being in any way really being accommodating, it means complying with the Korean way of doing things from the outset. Maybe that's fair enough, and maybe it isn't, depending on what you believe integration to mean. Given my experiences back home, I didn't want the Korean Government to make the same mistakes we did in our liberal naiveté and post-colonial guilt either, but on the other hand, I felt as though they could have given a little - but then, maybe that's how that long spiral downwards begins.

So what does the Ministry of Justice want? It wishes to invite me to undertake two conversion courses, one in Korean language and one in Korean culture, which will help towards naturalisation. I'm not interested in becoming naturalised - there's little natural about me in the first place - but with further investigation the situation becomes a little vaguer. While it is only an invitation, it carries an incentive - or possibly an implied threat - that successful completion will contribute points and therefore "help" towards visa renewal - potentially even general F2 ones where it says that 'skilled workers applying get 10 points'. You don't need to have studied logic as part of your degree course to see that the implicated flip-side of this positive condition is that not doing the courses may be "unhelpful" towards future visa renewals. Which leaves one wondering what all this really means, and where it's all leading. The letter makes a point of stating that the courses are open to 'any foreigners' and goes on to list many examples including 'overseas students' although curiously, English teachers aren't mentioned. One has to presume at this point that 'any foreigners' will only include those fortunate enough to have someone with the time to translate the letter for them, investigate the website and inevitably, phone up the office concerned when they realise how inadequate the former two are.

Language is one thing. I've been studying between one and two hours a day since returning to Korea with little success, and yet I certainly see the need to achieve fluency - lest I end up like those people back in my home city who don't speak English living in their ethnically-divided cantons. So if Korea is to extend the gloved-hand of friendship and help me down that road with the carrot before me and possibly the stick behind, so be it. Culture though, is another matter, because it can be very subjective. Before giving up and unexpectedly leaving the Disunited Kingdom, my wife undertook and passed a sometimes difficult and mandatory Government-run Life in the UK exam, which is similarly presented as contributing towards visa applications. It largely - though not completely - boiled down to a predictably politically correct and uncontroversial exercise in dry facts and statistics about life in Britain, which I promise you most British people would fail. If you happen to be British and think you wouldn't - try this - I've no idea when an adult should join the New Deal programme, what percentage of children live with both parents, or precisely how many Jewish people live in the country. The test has to be studied for and there's quite a high failure rate. Political correctness in the UK largely demands a certain line in bland questioning, but what of a Korean cultural test? I can foresee problems here, because I have a certain Copernican view of Korea which I'm not sure my hosts share. Furthermore, while I have some interest in Korean history, politics, economics and culture, and possibly some 'interesting' views, I have no interest in the lives of Korean celebrities or the kind of television programmes which audiences make "ooooo" noises to every five seconds. To be fair, I share the same disinterests in British and American culture too. 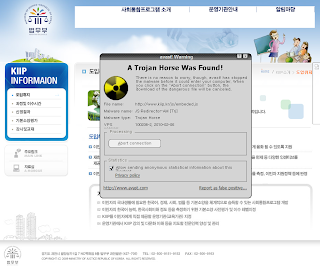 As well as containing a section called "MORGUE", Avast said the Korean Immigration and Integration Program website contained a Javascript trojan the moment I allowed it with NoScript, so my attempts to navigate through the pages were somewhat thwarted by the anti-virus program's prevention of functionality to protect me. I try be very careful when it comes to matters of computer security so there was only so far I was going to go under Windows. The website is http://www.kiip.kr but under the circumstances I'm not going to directly link it here - it may well be a false positive but enter at your own discretion.

I tried it under Ubuntu instead which is probably safer, but the menu wouldn't load at all so I gave up. If one of the questions on the cultural test is "Should Koreans be allowed to design websites?", I'm going to get that answer wrong. It's sad because Korea's refusal to adopt international and more security-friendly standards in web-design surely results in lost export business, and the day Digital Pearl Harbor finally occurs is most likely the day this country is cyber-bombed back into the 1980s. The people here will wish they'd never even heard of ActiveX the day their mobile phones stop working.

I got as far as learning that there are - I think - four language levels taking 100 hours each, and a fifth level for culture which takes 50 hours, but there appeared to be no information on whether this consists of one hour a week or 40, nor where the courses might be held - it can take me well over an hour to reach certain parts of Busan, so it has a bearing if I'm supposed to be commuting for over two hours a day for the sake of an hour's class. My wife, who had to work through all this on my behalf, concluded that "surprisingly, it doesn't have the most necessary information". I wasn't so surprised, if there's one thing bureaucrats everywhere have in common, it's their unfailing inability to think anything through properly or arrive at a functional and public-friendly result.

My wife phoned on Monday morning to be told that the courses were held for two hours three times a week, at a government office near PNU - which is just about as far away from me in Busan as it's possible to get - and at a private university in Seomyeon - which is a more reasonable 30 minutes journey. She also took the opportunity to complain about the fact that the letter and the website were written in Korean - to which the man taking the call laughed - but in bureaucratic embarrassment or belligerence it's impossible to say. There are a number of factors I have to weigh up before deciding whether to do this or not.
--