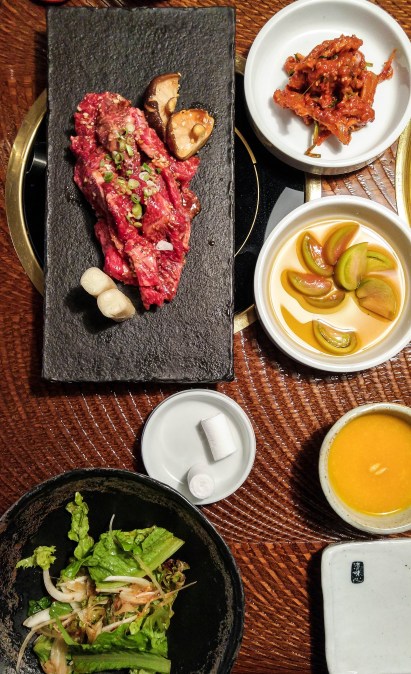 So, hanu (native Korean beef) is expensive. It’s expensive for a lot of different reasons, but most of them boil down to the fact that Koreans just think it’s better than other beef. The hanu beef rating system in Korea has six levels, from 1++ to off-grade, and the Korean system, like that of Japan and the US and unlike many European countries, takes marbling heavily into account. This may be influenced by Korea’s neighbors more so than anyone else, given the worldwide fame Japan’s wagyu and Kobe beef has obtained.

Korea’s cattle have not historically been bred for eating. While beef bones play a big role in Korean cuisine, cows were mostly used for farming and leather, in the past. The native breeds are thought to be zebu hybrids and are narrow-chested and bred to work. Today, Korean cattle breeders are working to improve the hanu physique and to get a little more meat on those delicious soup-stock bones, and grain feeding is beginning to gain traction given how hard it is to produce well-marbled beef without it.

I come from a cattle-ranching family, and I really, really love cows. One of my favorite parts of my farm trips last year was getting to visit the cows. I never saw more than 20 heads in one place, and it was usually closer to 10, which is a really small herd, by American standards. In fact, it’s basically flat out impossible for an American rancher to get away with a herd that small these days, unless they have worked to create an organic, grass-fed brand. Part of what makes this undercrowding possible in Korea is that Koreans pay a much more reasonable price for beef than Americans do. Beef, in Korea, is a special occasion, as it would be everywhere if it were done right. Despite the pressure one often feels in the Korean work environment to always be available for a spur-of-the-moment hwaesik (work dinner), I found that claiming I had hanu waiting in the fridge at home was one of the most acceptable excuses for skipping out — nobody wants to let good beef go to waste.

It follows that Korean hanu restaurants would be ranked among the more “high level” Korean dining establishments, and many of them pull out all the stops to make their visitors feel the money is worth it. 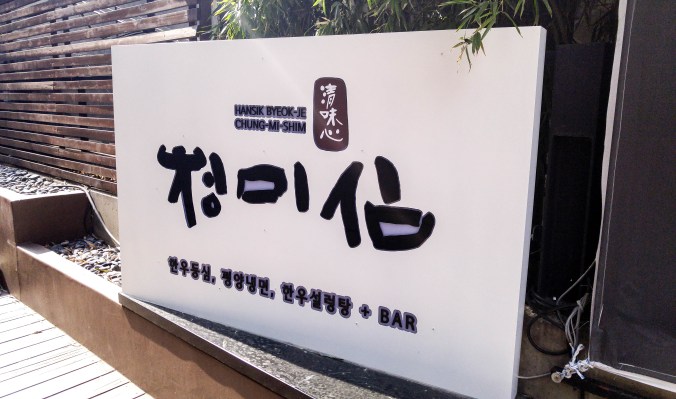 Chung Mi Shim is a hanu restaurant in Cheongdam that specializes in tenderloin and sirloin cuts. You pay 45,000 won for 130g of either, supposedly, but while we were there, there was a 30%-off special, so we paid a lot less than that. While their menu-listed prices are no doubt steep, even for hanu, you aren’t just paying for the beef, but also for the side dishes, which were plentiful. Chung Mi Shim had a few different sides that I had never had before, including a beautiful green tomato dish I could have consumed by the fistful. The flavoring on everything was thoughtful and delicate, as was the plating. I did find a bit of steel wool scrub pad in my hobak juk (kabocha squash porridge), but I survived it, eh? No matter. 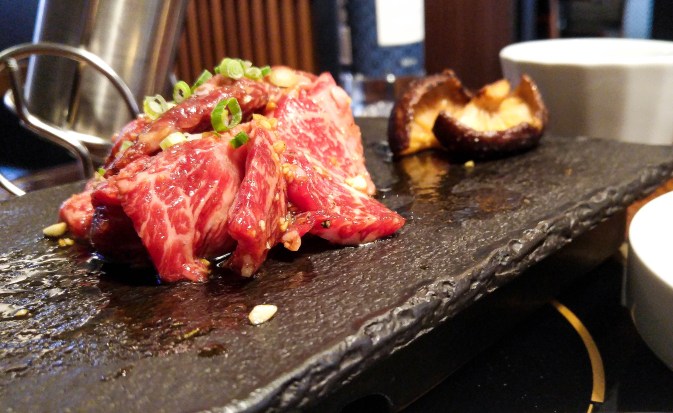 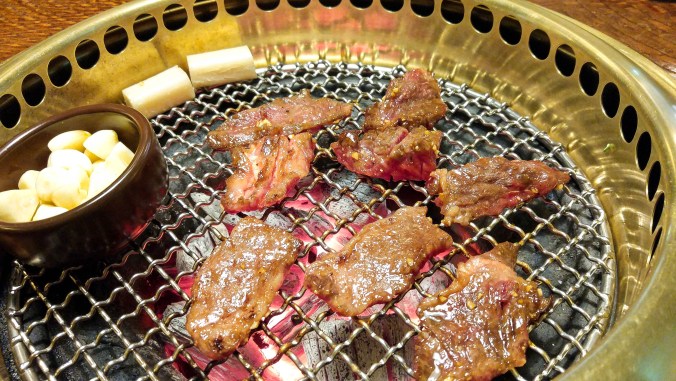 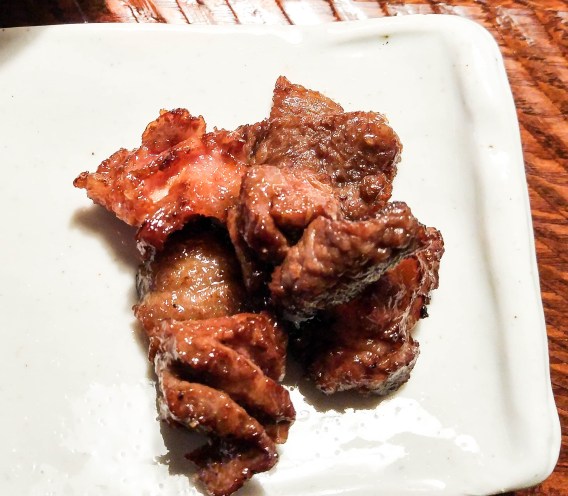 He grilled the meat beautifully, to his credit, and clearly felt he was doing us an honor by tending to our meat himself.

The meat was good, but honestly not much better than what my butcher gives me (to be fair, I do trek 30 minutes uphill to get to that particular butcher for that specific meat, and pay a neat penny for it besides).  The sides, however, were really beautiful, as was the Pyongyang-style naengmyeon (buckwheat noodles in a cold broth), the other house specialty and the thing we had really been looking forward to, given that noodles and broth offer much more room for house style than grilled beef. 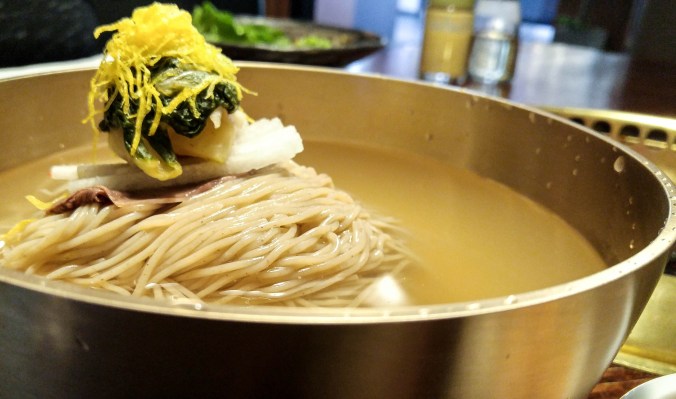 The noodles were fresh and firm, and the broth was mild and clean. It came to the table with the standard bottles of vinegar and mustard — the vinegar in particular was potent but without the metallic twang of vinegar that’s been pushed too far. Unfortunately, my dining partner and I were being goosey about the saucing, having never shared a bowl of naengmyeon before and not realizing each that the other also liked to dump that stuff in, so we wasted half the bowl with under-seasoned (in our own opinions) broth. It was nice without the torrent of vinegar and mustard, but even nicer with. It was definitely worth the slight price hike (8,000 won or a nice sized bowl) considering the quality of the ingredients.

Overall, we didn’t regret the money we spent (especially with the discount), but given the fact that I’ve got a great butcher in my pocket, I don’t think I’d go back again unless I had out-of-town guests and wanted to show them what Korean banchan (side dishes) are really all about. But then, I don’t usually go out for beef anyway. It was definitely worth the dining experience, and I’ll be trying for a long time to recreate some of their flavors at home (especially those green tomatoes).