Yesterday my friend and I were supposed to meet at Arario for lunch, and meet at Arario for lunch we did, but about an hour after we had planned to. AWL Fridays are tending, so far, to not really go as planned, because the museum restaurants finish lunch service at 2, and — although the websites and signs out front don’t say so — then take a break. We arrived at 2 on the dot and were promptly turned away.

Luckily, my friend, being the master of Seoul north of the river that she is, knew of a place just around the corner. 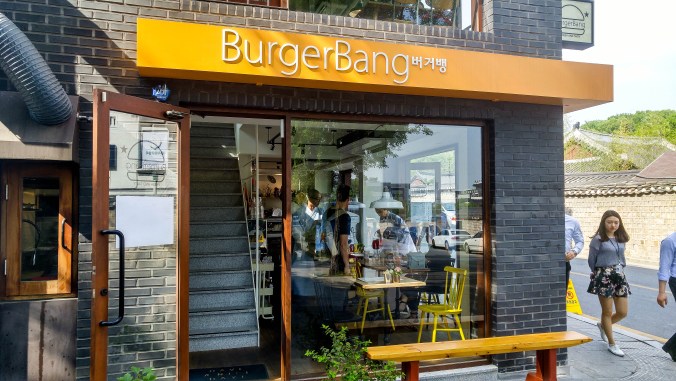 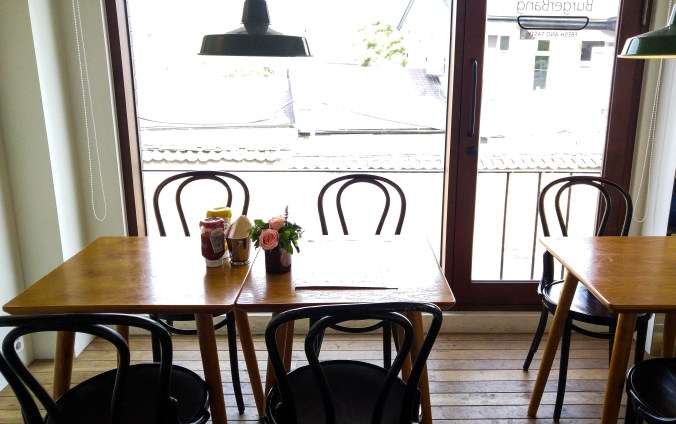 Burger Bang (that’s 뱅, not 방, for anyone who wants to Naver it) is located in Wonseo-dong, just to the west of Changdeokgung Palace. In fact, you can see the palace from the second floor of the restaurant, which is surrounded by floor-to-ceiling windows and full of light. 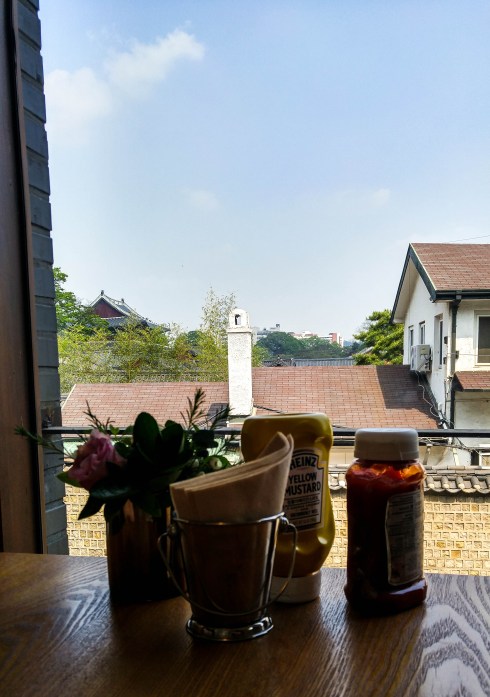 Changdeokgung is one of my favorite places in Seoul — a friend took me there a few days after I first arrived in Korea, and I still try to get over there to see the rear garden at least once or twice a year (my fondness for the place has even endured a rather traumatic language school listening test about the layout of the palace). It was the perfect day to sit and have a glass of 5,000-won house wine and a fantastic burger with the palace in the background. The owner told us they’d been open for about 5 months. They also do take-out, and although I learned later that they rest from 3pm-5pm and last order is supposed to be at 2, they served us even though we walked in the door at about 2:20. 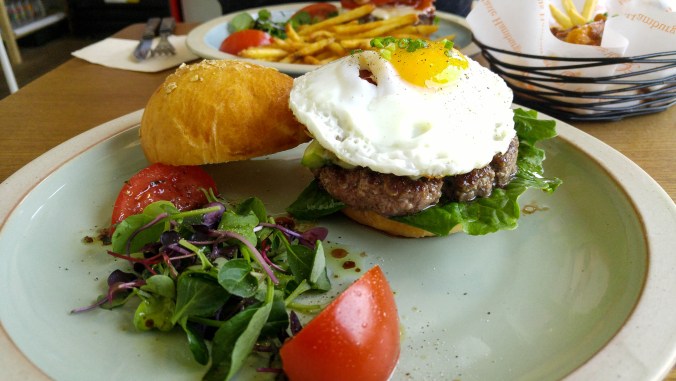 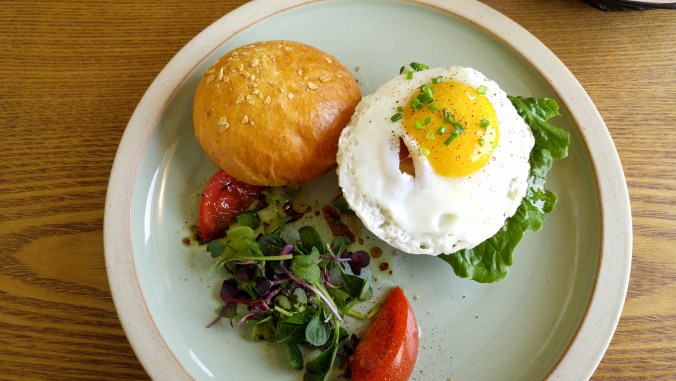 I had some reservations about ordering the French burger, which is topped with onion, mayo, bacon, a fried egg and asparagus. I love asparagus, but I knew that if it wasn’t cooked properly, I’d be begging for a burgerpocalypse. There is nothing I hate more than a burger falling apart on me — if you can’t pick up a burger and eat it with relative comfort and ease, it shouldn’t be called a burger. 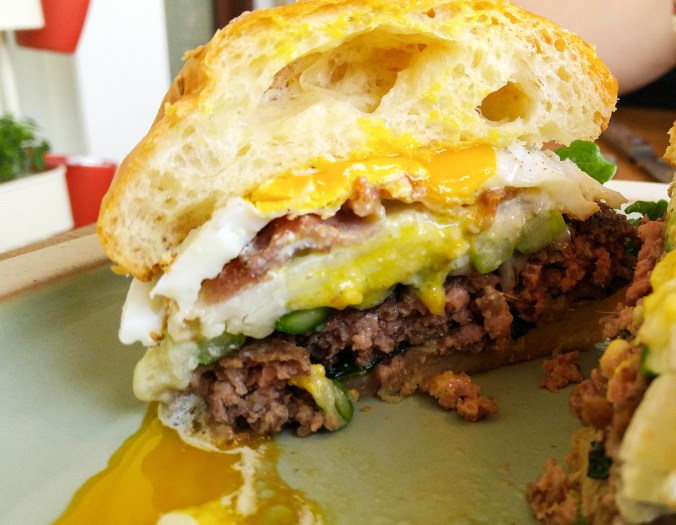 I had nothing to worry about. The burger held together and was absolutely delicious. The meat was just worked enough, just pink enough and well seasoned. The runny egg yolk was sopped up by the soft, crusty brioche bun (which Burger Bang makes in house, daily), and the asparagus was crisp but not woody.

My second choice, had I decided not to go with the burger French, would have been the American chili burger, which comes topped with cheddar, onion, chili con carne and mustard sauce, but it was a distant second, and I settled for trying the chili fries instead. 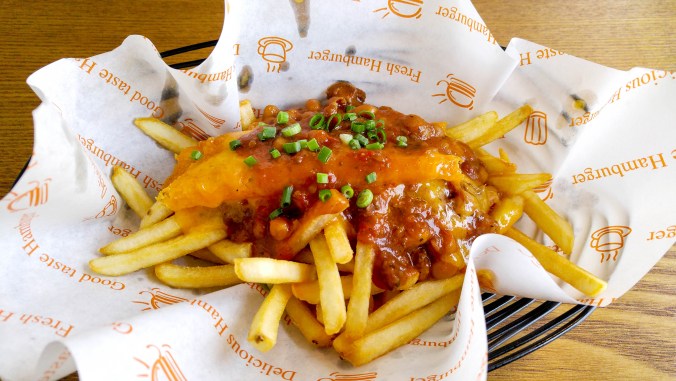 I think I might be kind of hard to impress with chili. The flavor of this chili was nice with a good amount of heat, but where I come from, chili means black beans, kidney beans and all things dark and heavy. This chili used navy beans, which I apparently managed to get over, because we polished them off, anyway.

My friend ordered the burger bang, with cheddar, onion, tomato, bacon, spinach and mayo. We did a quarter-burger exchange, and hers was good, too, but we both agreed the burger French was the real deal. Burger Bang also offers the burger American, with onion, cheddar and mustard, and the burger Italian, with mozzarella, arugula, Parmigiano-Reggiano and tomato sauce. The burgers range from 8,000-13,000 won, and a set, with soda and fries, is an additional 4,000. A side of regular fries is 5,000 won, while the chili fries are 8,000. You can also order coffee, smoothies, and fruit ades. On the grown-up beverage side of the menu, they offer a nice selection of imported bottled beer for 8,000-12,000 won and house white and red wine, 5,000 for a glass and 30,000 for a bottle. Oh, and a note for my fellow Texans out there: They have Dr Pepper.

For all of the exciting, weird and wonderful things there are to eat these days in Seoul, it can still be surprisingly hard to find a good burger. I sat there for a good three minutes contemplating taking a photo of my empty plate when I was finished eating simply because it was exactly that: empty. There was no disgusting soup of improperly-rested-beef juices and unnecessary sauces. And the bun held its weight without being heavy, thanks to its proper crust. Even the little pile of young greens and tomato served beside the burger was dressed beautifully and not just thrown on the plate to take up space. Burgers are simple, but that’s why the magic is in the details, and Burger Bang manages to nail those.