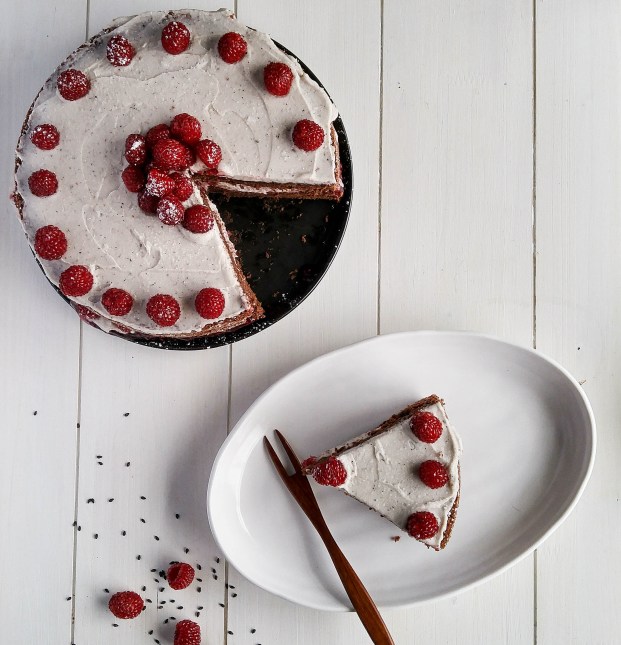 Sometime a few weeks back, I got it into my head to make a dessert with black sesame seeds. I don’t know why, but I can tell you this cake won’t be the last of it. Black sesame seeds are nearly as aromatic and rich as coffee or chocolate, but in a very subtle way. They have a longstanding place in Korean traditional medicine and in traditional Eastern medicine in general. One of the main benefits of sesame seeds is that they are packed with calcium, and as black sesame seeds retain their hulls, they have even more calcium than the white seeds.

Of course, we’re talking about cake here. Health benefits don’t really figure in. But there it is, anyway.

I knew that if I put the seeds into a cake, their flavor would likely be lost. On the other hand, as far as toppings go, their texture is less than ideal, even when they are finely ground. I finally settled on an infusion. 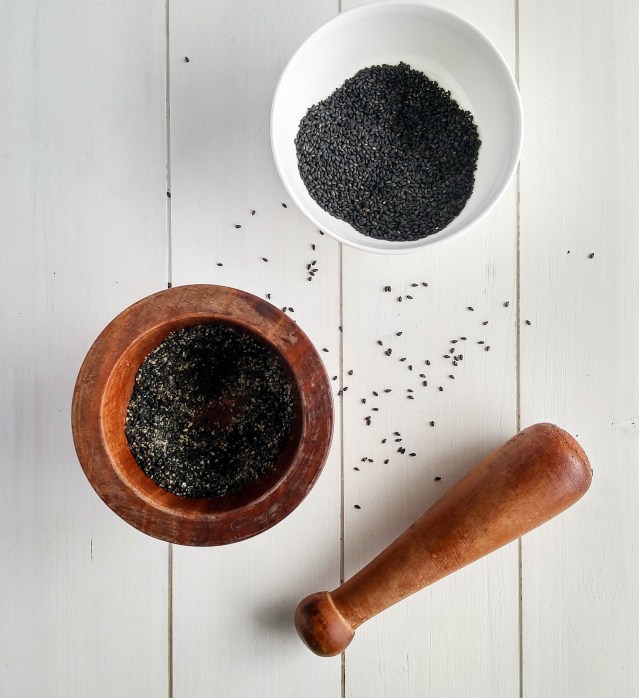 I didn’t want the seeds too finely ground, as I wanted to be able to get the bulk of them back out of the cream, so rather than use my coffee grinder or food processor, I opted for the good, old fashioned mortar and pestle.

You know that song from The Sound of Music? Raindrops and whiskers? The smell of ground black sesame seeds would be on that list for me. 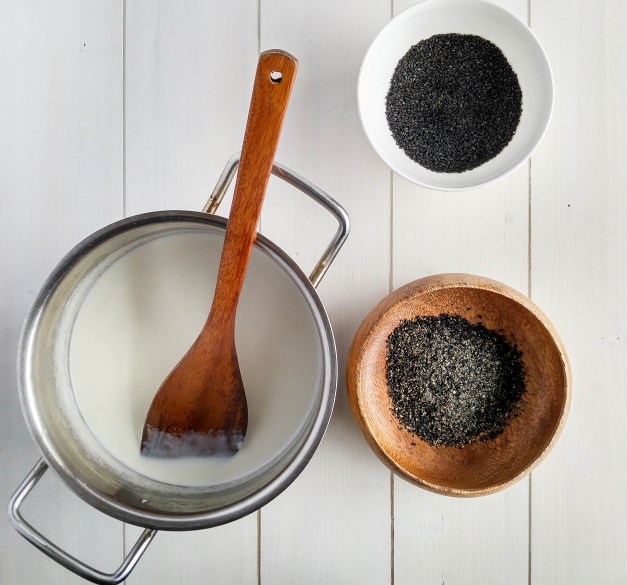 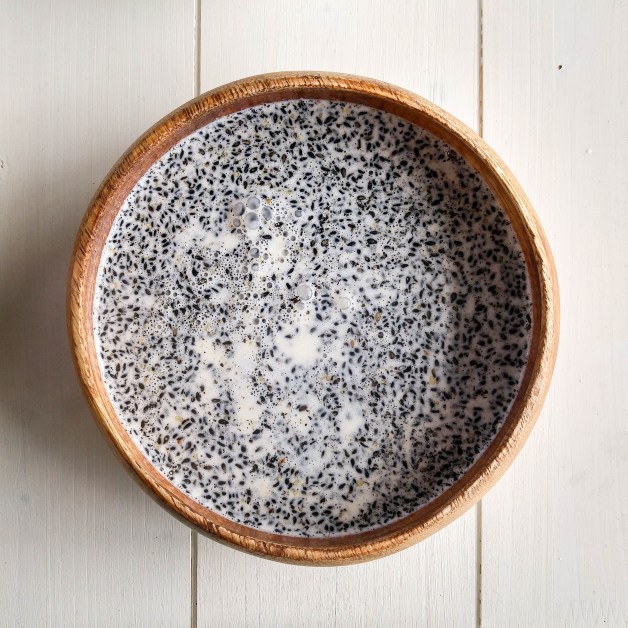 Normally when you make a cake, you make the batter and bake the cake layers first, as they need to cool completely before you can top them, which can take several hours. With this cake, though, you’ll need to heat both the cream (to infuse it) and the jam (to liquefy it), and they will both need more time than the cake to cool back down before you can apply them (especially the cream, which has to go back in the fridge for at least four or five hours before you can whip it), so it’s best to do them first.

As a side note, I’m not trying to be a slime ball with the ‘read more’ cuts, I promise. I just have a couple of different camps reading this blog. There are those who find it through recipe websites and come here for posts like this one, and then there are those who are in Korea just looking for a decent place to grab a bite to eat who couldn’t care less about dozens of photos of me making a cake. I promise to only use them on recipes and posts that are very heavy with photos that will take forever to load on the main page and cause people to have to scroll for ages to get to the next post. 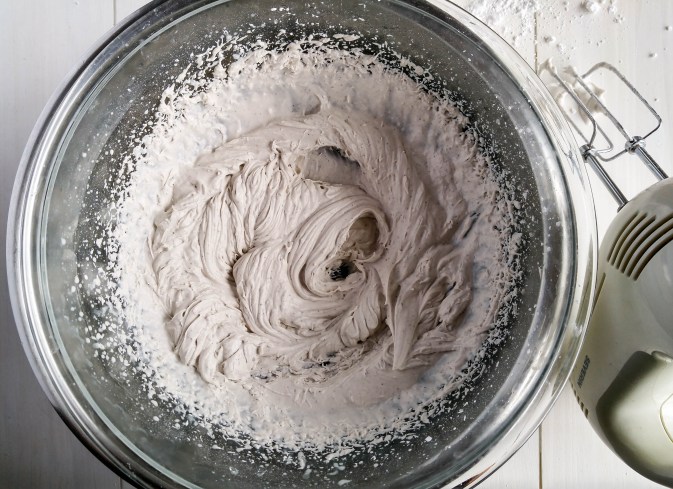 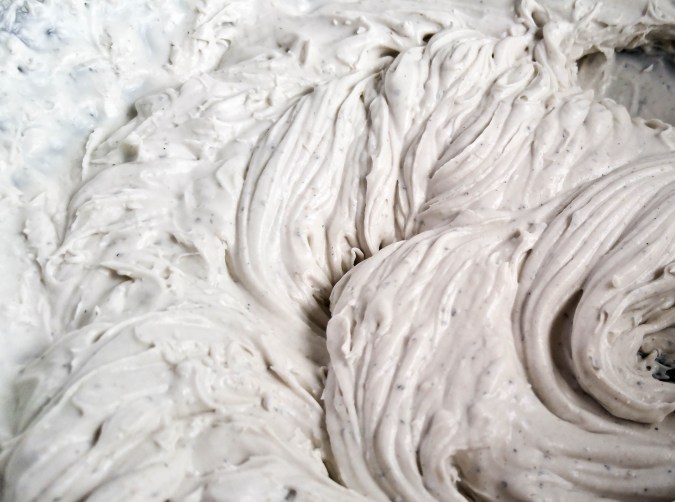 I left the seeds in for the duration of the cooling process and only strained them out just before whipping the cream. Little flecks of the hulls remained, giving the cream, which had turned a gentle blueish-grey, a nice speckled look without affecting the texture of the cream itself.

I don’t know why, but I kept thinking of Earl Grey tea while I was making and consequently tasting the cream. The color was similar to what it would be with an Earl Grey infused cream, for one thing, but it also had the same kind of slightly spiced sweetness to it. 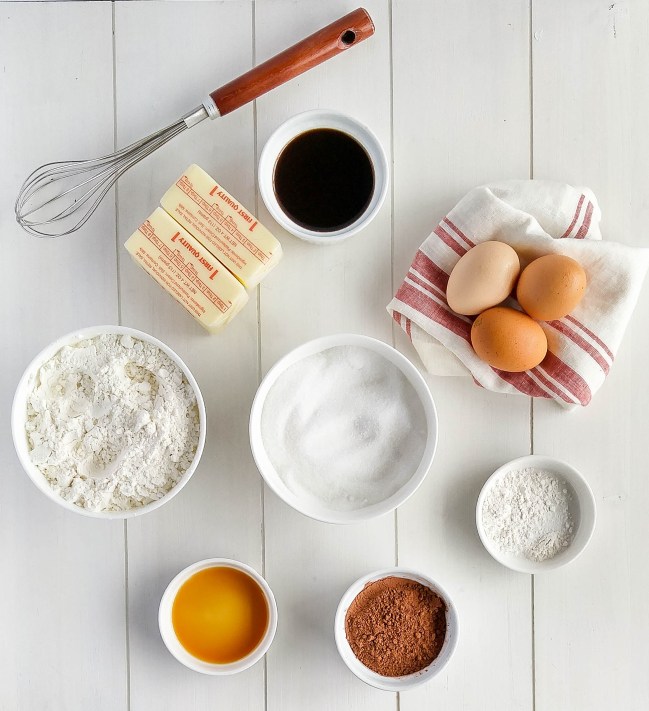 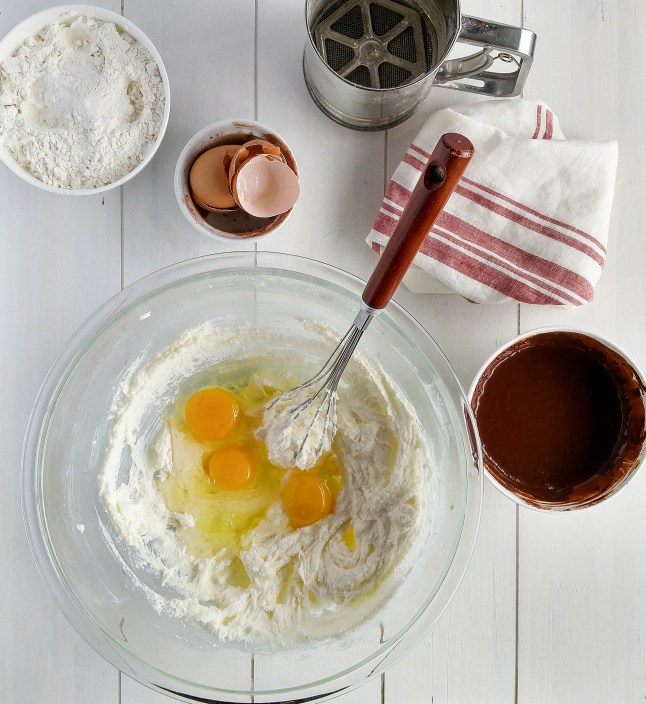 Jam and whipped cream are two notoriously troublesome fillings for a layer cake, because they tend to squish out and slide, so I went with a lighter batter and kept the layers thin. 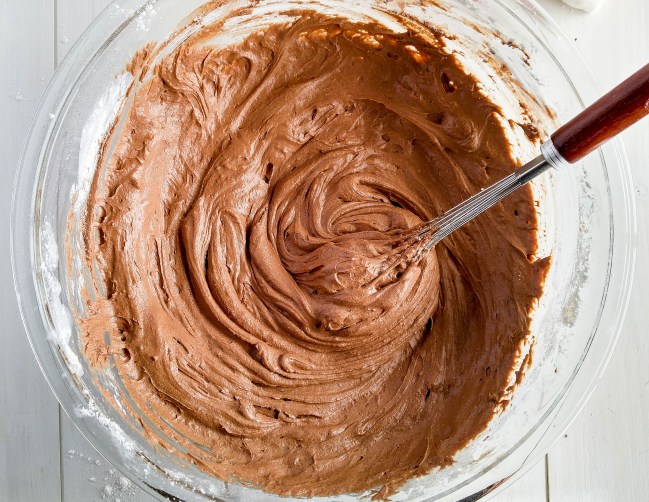 As a side note, anytime I make chocolate anything, if there is a liquid element that can be heated up like water or milk, I always, always add a bit of coffee. In this case, I just used freshly brewed coffee in place of water. There are a few different reasons for this. First of all, dissolving the cocoa powder in a hot liquid helps avoid clumping, which seems inevitable to some degree even with sifting (the same concept applies to recipes with melted butter and cocoa powder — I always dissolve it in the butter, rather than adding it in with the flour). The coffee also highlights the chocolate and give it a little more depth. The coffee flavor itself never comes through — it just makes the chocolate taste slightly richer and more bitter, which in turn balances and highlights the sweetness of the cake. The final reason is that the coffee adds a little more of that chocolate brown color to the batter. 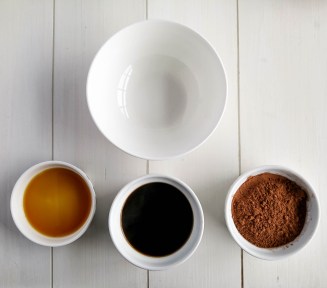 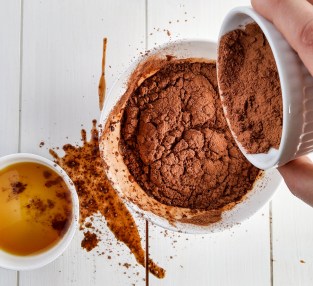 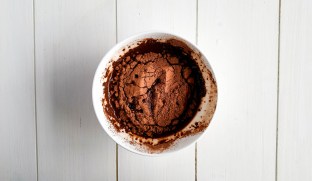 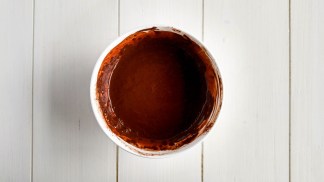 Crucial tip for this stage of things, if you’re like me and slightly slow on the uptake — that bowl of cocoa powder and coffee may look delicious, but it is not sweetened yet and basically tastes like really bitter mud, so don’t lick the spoon, no matter how tempted you are. I’ve done it more times than I’d like to admit. 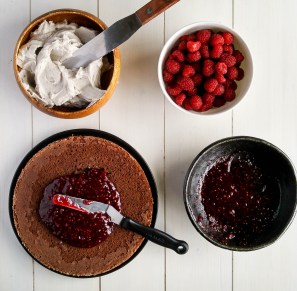 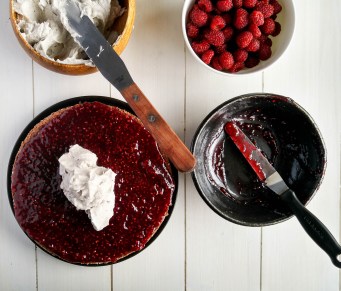 Whipped cream on top of jam, always — never the other way around, unless you want a mess. The cream spreads much more easily than the jam, which means the jam is more likely to stay in place while you smooth something over the top of it. If you really want the aesthetic of the jam dribbling out over the cream, you can always put the cake together upside down and very quickly flip it over. I don’t recommend that, though, as inevitably the filling is bound to come oozing out as soon as you put on the top layer. Also, as a note, if you intend to cover the entire cake with cream rather than just the top. you should stop the layer of jam and cream way inward of what is shown above, or else you will end up with a jammy streak along the outside of your cake. 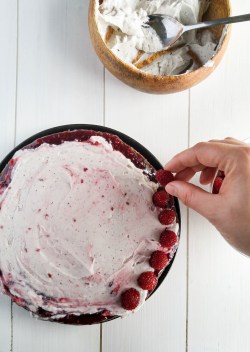 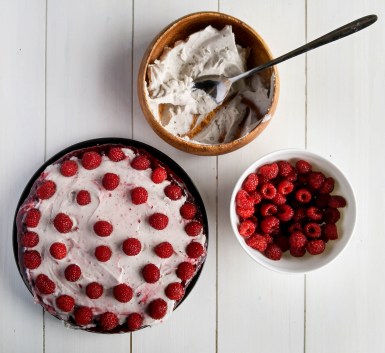 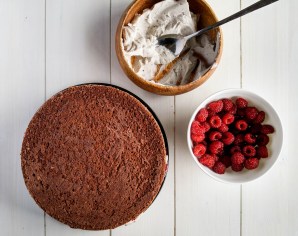 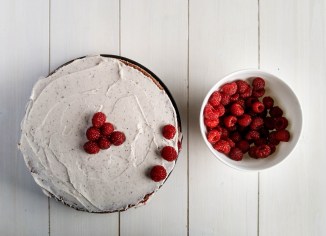 Put on the top layer, smooth it over with the remaining whipped cream and top with raspberries and powdered sugar.

It’s not a cake for the faint of heart — it has a lot of strong flavor elements. But I don’t much care for light, overly sweet desserts. I like a little body. A lot of body, alright. But I think the chocolate and raspberry play well with the black sesame, holding their own but not drowning it out. All the same, a little slice will do ya, with this one. 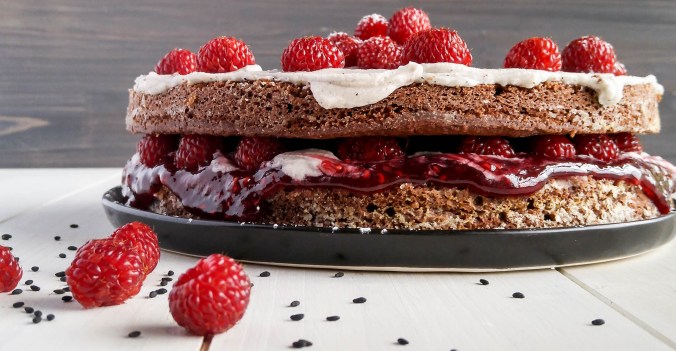 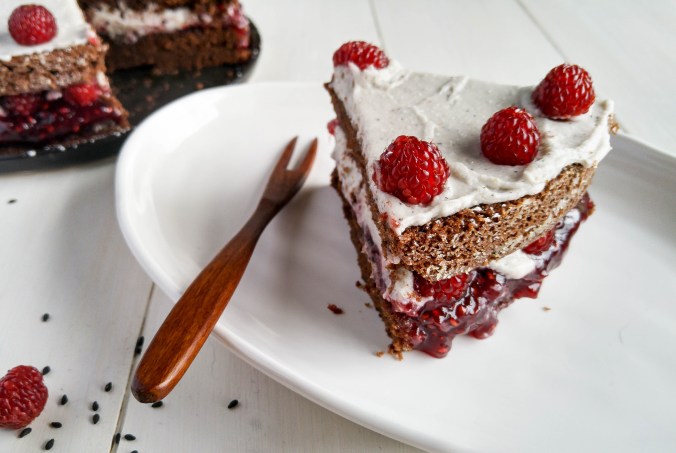 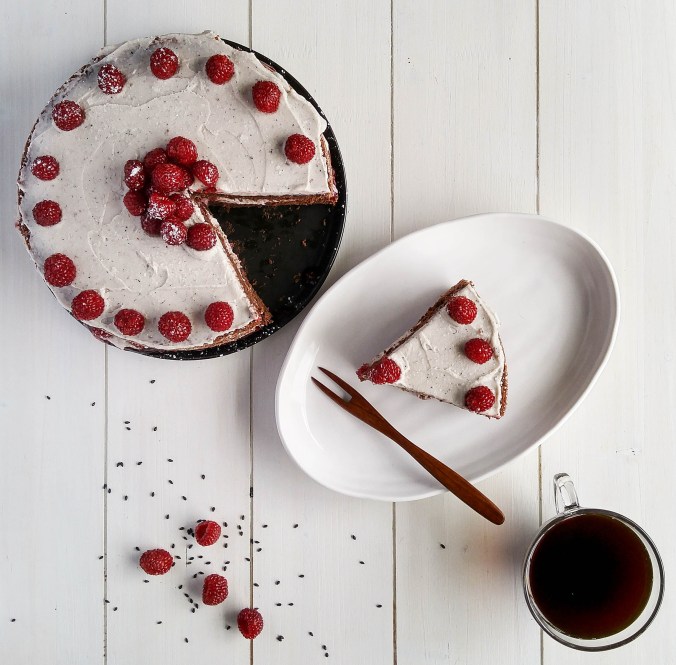 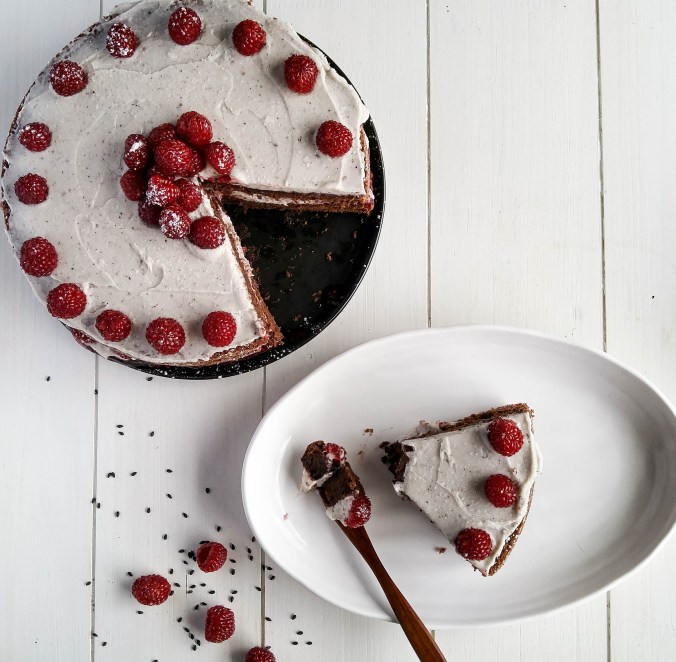