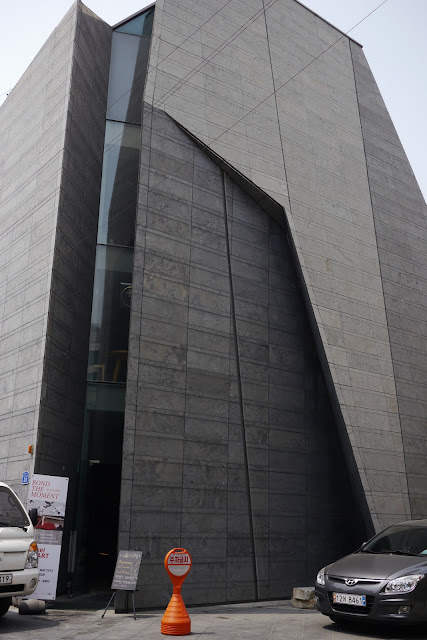 With a name like "Alternative Space LOOP" and a location tucked in one of the neighborhood streets of Hongdae, I couldn't help but be enticed to visit. It was a little tricky to find (directions at the end of the post), but with a bit of map viewing beforehand I was able to find my way. 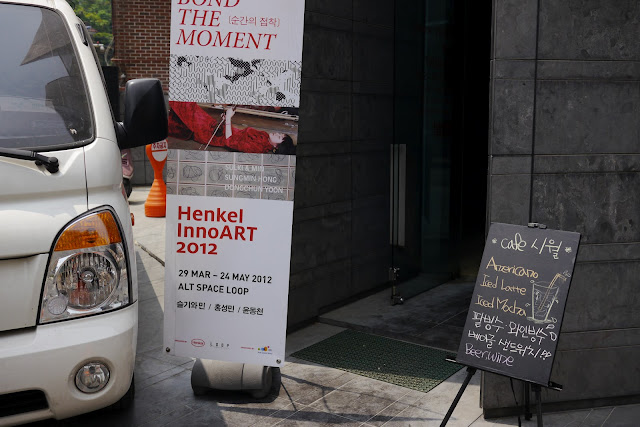 I arrived just as the gallery sitter came to open the doors and put out the signs. So perhaps, I was early or maybe she was late. No matter, I took in the scenery of a small residential area with a gallery tucked in and also a neat little cafe. 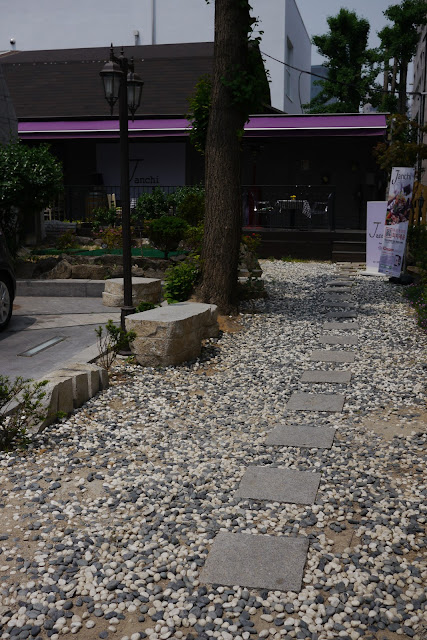 Currently at Alternative Space Loop is the show, "2012 Henkel InnoArt Project" which is defined as:

Through the 2012 Henkel InnoART Project, we aim to introduce ideal examples of co-existing and sharing with other beings. ...The goal of the project is to introduce this instant bond that allows for the acceptance and understanding of other beings. What is important here is not ‘the state of bond’ but ‘the endeavor to achieve a bond’, which will be accomplished through cooperation on many levels. For example, a sort of collision generated by the combination of a corporation and an art community, an education community and an art community, two different genres, or two different age groups and a new type of experimental art created from such combinations are to be put on display.

From this I am going to take that the artists were trying to convey different ways of "co-existing" and how that is achieved. So then when I first walked into the building I was greeted by the sounds of muttering, images of video art on the wall and two desks empty but with what appeared to be left-overs from a performance piece. I was intrigued. 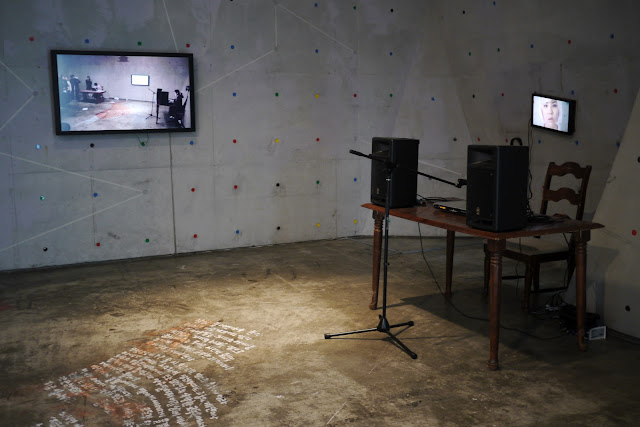 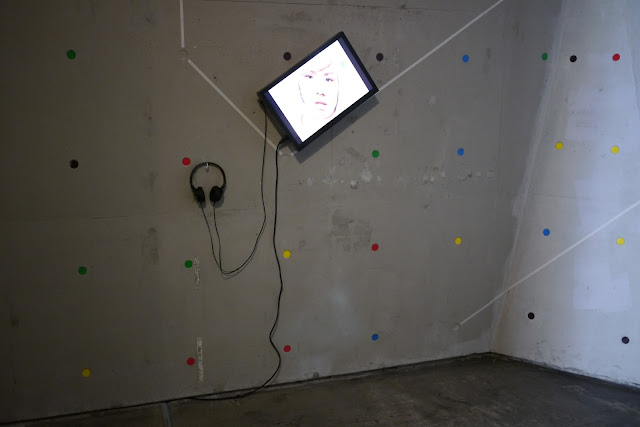 Notice the "dots" on the wall, this carried itself elsewhere in the downstairs exhibit. But I wandered upstairs and found that there was a nice cafe, with cozy places to sit and walls full of Art books and magazines. 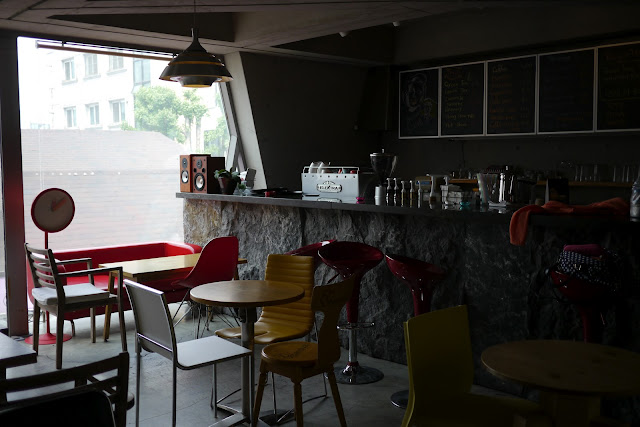 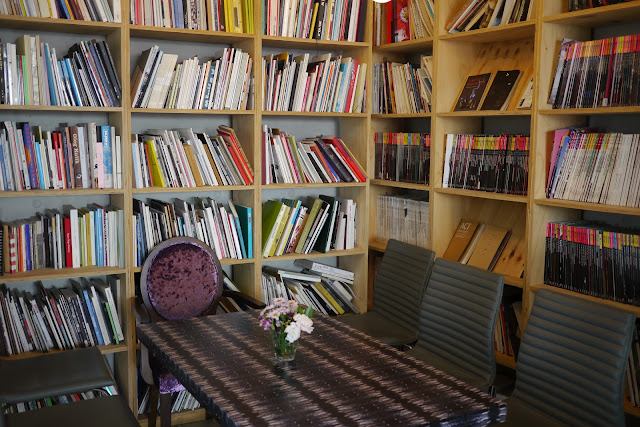 I definitely feel like going back, solely for the purpose of sipping something cool and checking out some of their books. I then meandered upstairs to find closed doors, but shelves of DVDs. I think they were the gallery's archives. 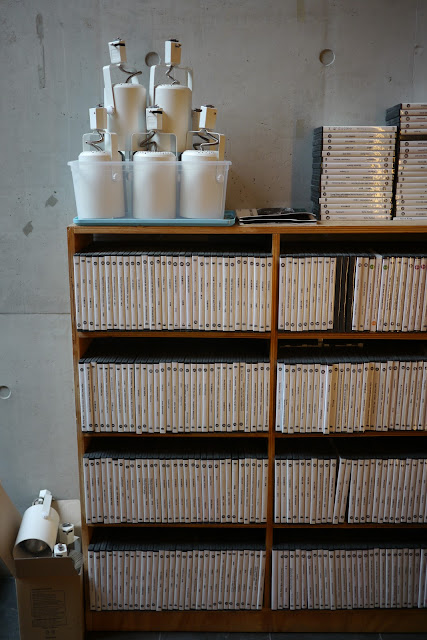 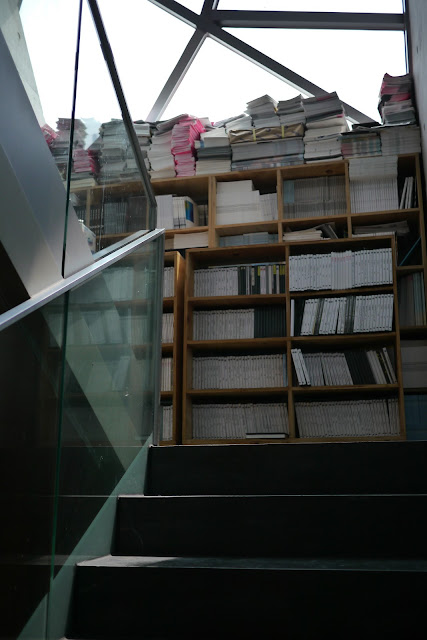 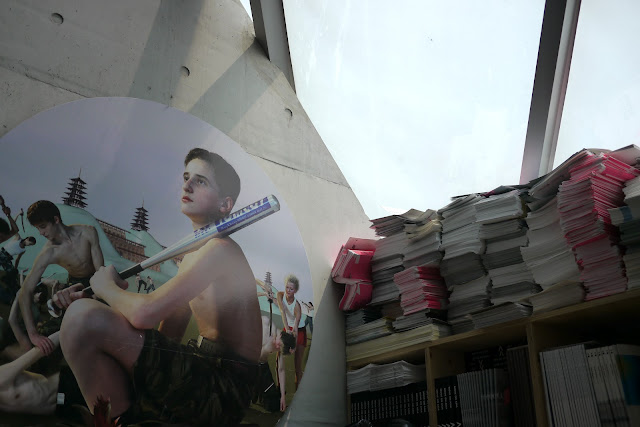 I then proceeded downward to B1 to see the rest of the exhibit, which consisted of sculpture, installation, photography and painting. 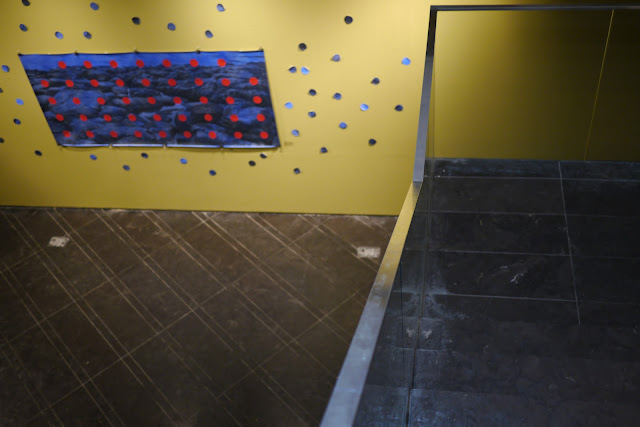 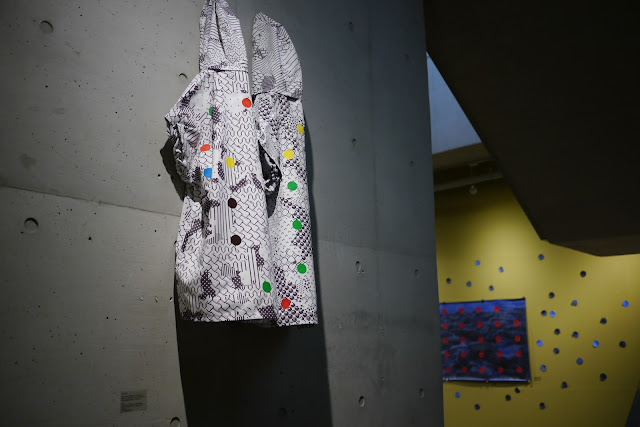 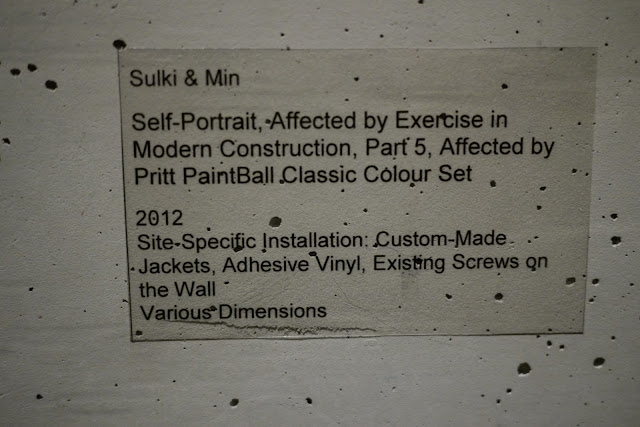 As frequently pointed out, many of us incorrectly use the word ‘wrong’ in place of ‘different’. We often subconsciously think that what is different is wrong or negative. The purpose of this project is to recognize the state of being different as is, to demonstrate the importance of keeping a moderate distance from others based on this recognition, and finally express the underlying value through an artistic language. 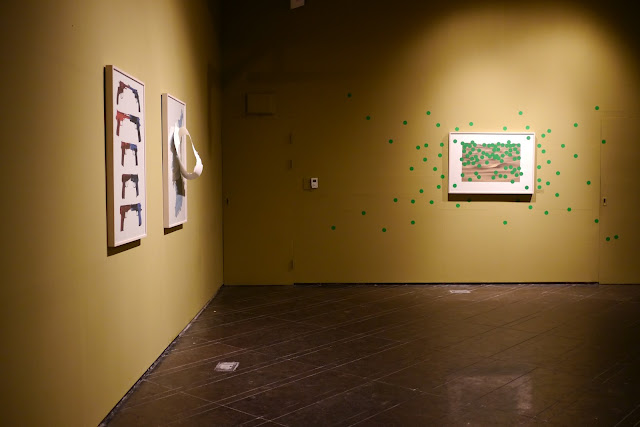 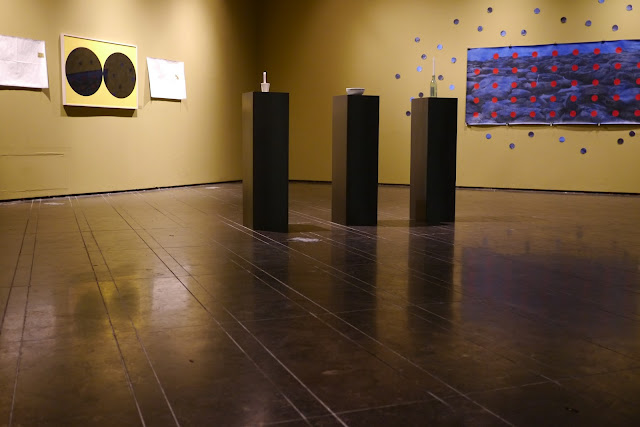 I'm starting to see the message or language used in this exhibition. The dots that are placed here and there obstruct the main painting or photograph, but in the end makes it different and unique. Yet at the same times ties in with the other works.

I enjoyed the following work as it was a deconstructed image of the Korean peninsula. It definitely had a more translatable feel to it. 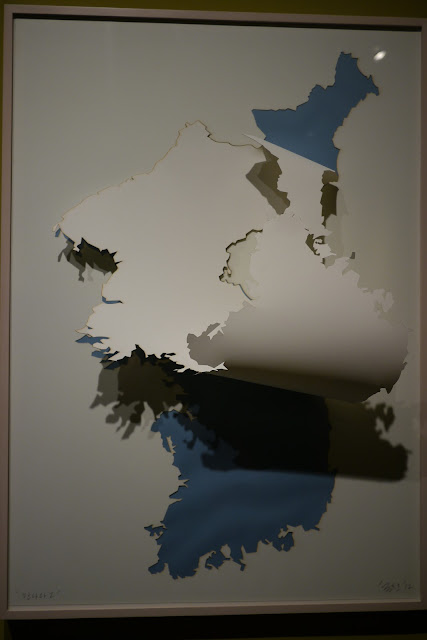 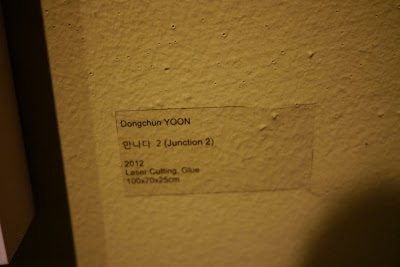 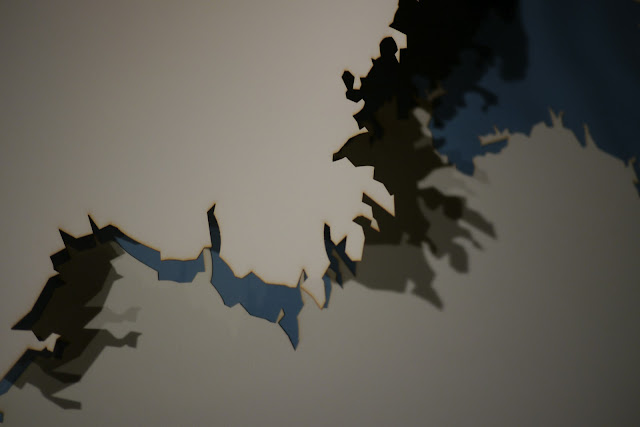 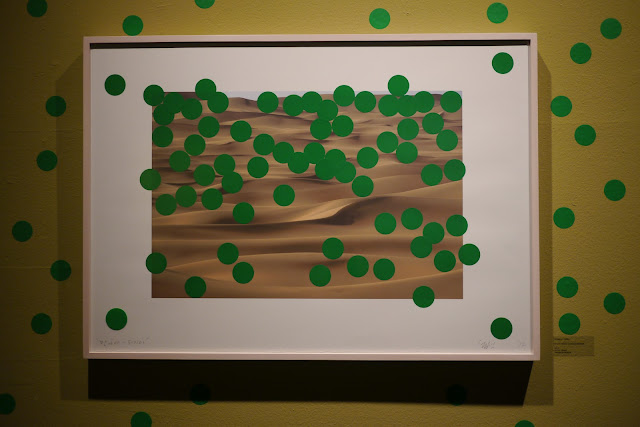 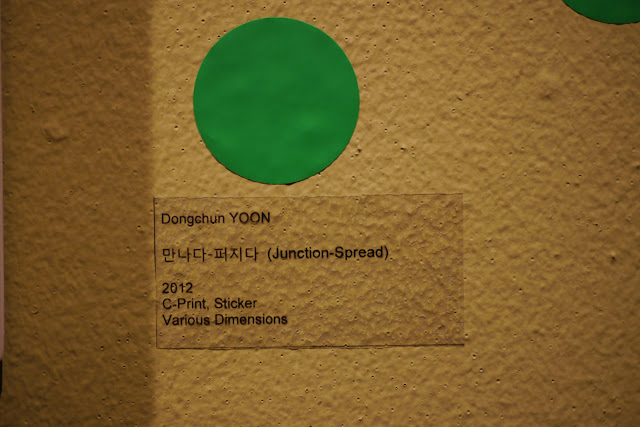 What I liked about the sticker dots were that you can see they were placed above the picture. Not just part of the print, but almost another layer to the piece. The pieces in the center of the room, seemed to evoke thoughts of juxtaposition. 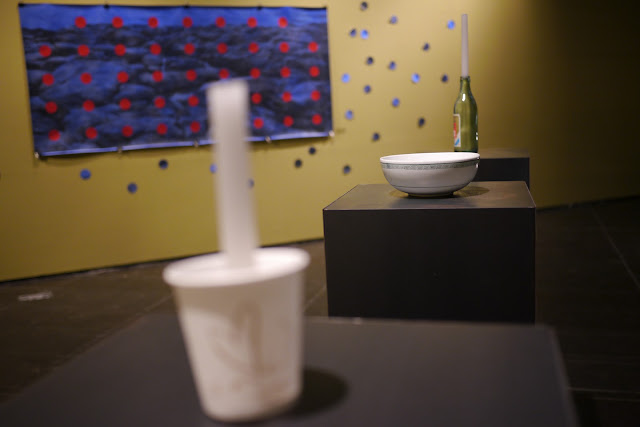 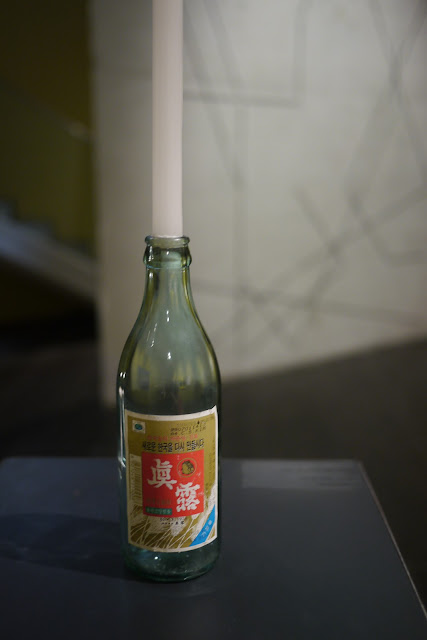 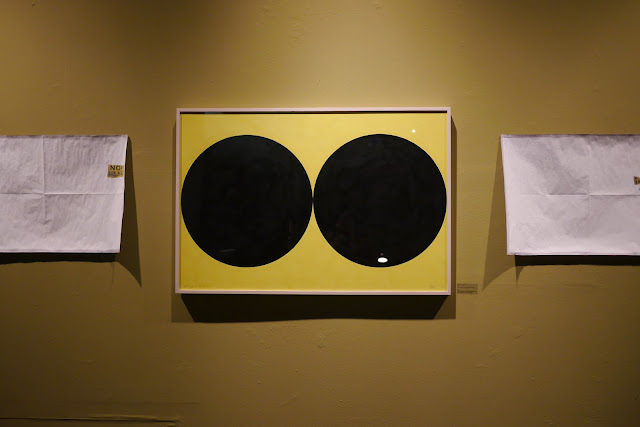 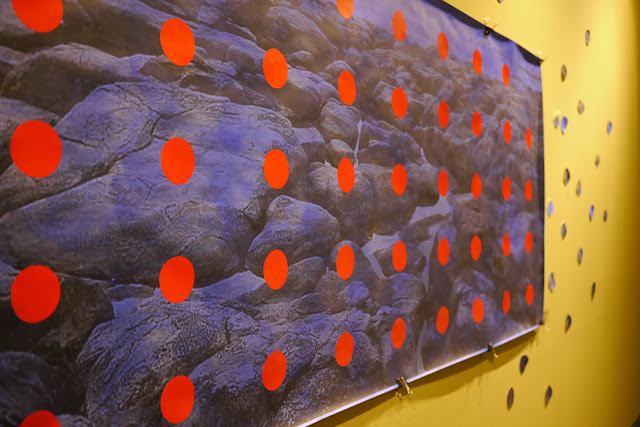 How To Map:
- Head out of exit 8 from Hongik station
- Go towards the loop and head left.
- Get to another loop and turn in right with a Family mart on your left. Go up this street for a while.
- When you see on the a cafe called "Free Heart" you want to turn right into the alley.
- Keep going and you will see the obvious structural building pictured above.