To Aid or not to Aid

That is the question. A belated Happy Chuseok to everyone in Korea, I hope the time was spent enjoying the holiday with friends and family rather than backed up in traffic. It seems to me that most everywhere in the world has some form or another of a “Thanksgiving” holiday and this tends to entail eating large quantities of food (which I most certainly did). One place this seems not to be the case (at least for most of the population) however, is North Korea.

Coming via CNN, with have this story and the accompanying video of the ever-present food problem in North Korea. Like almost all of the small amount of footage of lives outside of Pyongyang, it is saddening to watch:

As such, we once again are faced with the question of food aid to North Korea. The World Food Program undoubtedly put together this video to show the dire situation and to drum up donations and support for resumed aid operations and the fact that the North Korean government allowed them to do so shows that even they recognize how bad the situation is. After watching, of course the instant emotional response is to give aid as likely no one out there is pro-starving children. When we take a moment and step back, however, we find a much more complicated question and (as with most things North Korea related) no easy solution. Can we support these people without supporting the regime of North Korea?

To begin, we have to look at what brought the DPRK to the precipice where they currently stand. As noted by the WFP, it has been as especially bad season with many crops destroyed by rains and floods, however this isn’t a sudden crisis created by natural disasters, but rather a long, steady march into hell that has already left millions of innocent lives beneath its feet. While this doubtlessly began with the formation of the state and the Korean War, recent events have definitely quickened the pace. Of note we can look to the currency revaluation (or Great Currency Obliteration as coined by Kushibo and I highly recommend reading his posts on the subject for greater depth) which occurred about two years ago. While on the surface, the Stalinist nation is fed by government rations (the three potatoes as noted in the video), in reality private markets are what really kept things going. When the revaluation occurred, in the simplest terms having two zeroes lopped off the end of won notes (1000won became 10won etc.), the government disallowed use of the old notes and strictly limited the amount that could be exchanged and only that which was already in state banks. This meant marketers who hoarded cash from their officially “illegal” businesses suddenly were left with piles of paper. In a frantic move, last year the North lifted all restrictions on private markets, but only to show the next problem, there is nothing on the shelves and once again the reasons for this go far beyond the natural. It is important to note that this is not the first food shortage in the recent history of North Korea, as beginning in the early 90′s a famine hit the country which resulted in estimated deaths in the millions (perhaps as much as 10% of the population). While the argument can be made that this crisis has continued to today, it is undoubtedly true that a short reprieve occurred at the turn of the millennium thanks to the North’s biggest benefactor, South Korea. While other countries, notably China, participated strongly in the aid efforts it was the Southern neighbor (with whom North Korea is still technically at war with) who most lifted people back to their feet. During these years of the “Sunshine Policy“, food flowed across the border and while much ended up in the hands of elites and the military, enough trickled down into the markets to somewhat stave off starvation. While there was genuine hope at this time and foundations seemed strong, they quickly eroded through provocations and changing political environments. The structures of support that had been built were blown up by nuclear testing, burned to the ground with the election of hard-liners such as Lee Myung-bak and the embers dashed with the Cheonan sinking and shelling of Yeonpyeong-do. Unsurprisingly, with the aid trucks of rice now silent across the border, North Korea has now offered to re-return to the negotiation table, but many in South are skeptical about beginning the cycle anew. 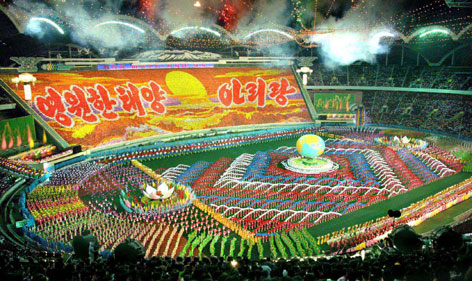 A quick look through history tells you that this is a game that North Korea has played before, playing on the emotions of benefactors to ensure its domestic sustainability while utilizing its own resources for power plays and the personal gain of the leaders and elites. It is easy, then, to wonder if this is just a continuation a genuine crisis. There are most certainly signs of the latter, with defectors calling the current famine far deeper and more widespread than in the 90′s and even reports of large numbers of the military going hungry. However, on the reverse there is equally damning evidence of business as usual. Kim Jong-un, son of leader Kim Jong-il and MAYBE presumptive heir to the dictator, certainly doesn’t seem to be suffering with his people given his girth and plethora of luxurious residences all built since the currency revaluation. In addition to the estimated monetary costs (around 150 million USD), it is also thought that agricultural land was destroyed in their construction and laborers would pulled from farms to build rail lines and roads to them. Additionally, figures have shown luxury good imports of $10 million over the first half of the year, and the Arirang Festival (or Mass Games) are currently running unabated at costs that can’t possibly be made up by ticket sales. Without even factoring in military and nuclear development budgets, hacking projects and leadership travel (presumably to ask for aid), the question becomes whether North Korea can’t feed its people or it simply won’t. A bit of quick math with the old charity line “a dollar can feed four starving children” line suggests that if Dear Leader had allowed Brilliant Comrade to crash in one of his eight or so palaces, 1.6 million children could have been fed for the year. Additionally somewhere around 1000 tons of rice could have been purchased on the open market with the $500,000 spent on high grade beef destined for the leaders table and those of his entourage this year.

So all this being said, where do I stand? Since you waded through the thousand or so words to get here, I am going to assume that you are interested in my opinion and therefor here it is. Unfortunately, I have to count myself among the bastards standing against resumed food aid to North Korea, even if it does hurt each and every time a report like above surfaces (and I promise you, I pay attention to each and every one). I am not among the doubters who believe that the current starvation is a ruse, planned and propagated by the regime to secure aid and supplies, perhaps ahead of the planned 2012 celebrations (celebrating the 100 year anniversary of founder Kim Il-sung’s birth). I truly believe there is a major crisis to the north, but still the only food aid I can agree to is what I would call “hand to mouth” aid, where workers are physically give ready food to the needy and watch as it is eaten. This means no bags of rice handed out in villages, no crates of supplies cracked open and handed to outstretched hands. These days I wouldn’t even consider packaged baby food and formula safe from confiscation by government officials. I do fully realize that this type of aid can’t possibly meet the need and therefor many thousands, if not millions, will die of starvation that could have been prevented. The onus of guilt for this catastrophe, however, should not be burdened by the international community however, but by the leader of this country and the responsability of the people is to make the cries for justice so loud that even his deaf ears can hear them high atop his perch. Honestly, I don’t have high hopes for this and find the Arab Spring connotations inaccurate as the situations are incomparable. However, it is said that that wave that washed over Tunisia, Egypt and Libya (among others) began with the death of a street vendor named Mohamed Bouazizi, who immolated himself for the injustices committed against him. Whereas his face was burned in the minds of millions who eventually revolted, I the picture of someone in my mind which will define these events for me regardless of the outcome.

Her name is not known, just that she was 23, homeless 꽃제비 (orphan) who for a brief moment became famous as she was filmed picking grass to eat featured in the KBS special “North Korea’s Third Generation Succession: Who Is Kim Jong Eun?” and gained international media attention. The filming occurred in June of last year in South Pyongan Province and according to sources died on or around October 20th of starvation. I remember first seeing the video and then the news of her death. Each time I wondered about who this girl would be if she had been born a few hundred miles to the South, she likely would have just been finishing University and underneath the dirt and vacant eyes, you can imagine she would have been pretty at this time and most importantly with a future. Perhaps the time for her being a catalyst of change has already past and photos of her face aren’t going to become banners held by the people of North Korea in protest, but still I can hope that the current times will lead to a better future. Too late for her, but in time for millions of her people who hopefully will remember.